5 Tips For Removing The Dead Body From Your New Apartment 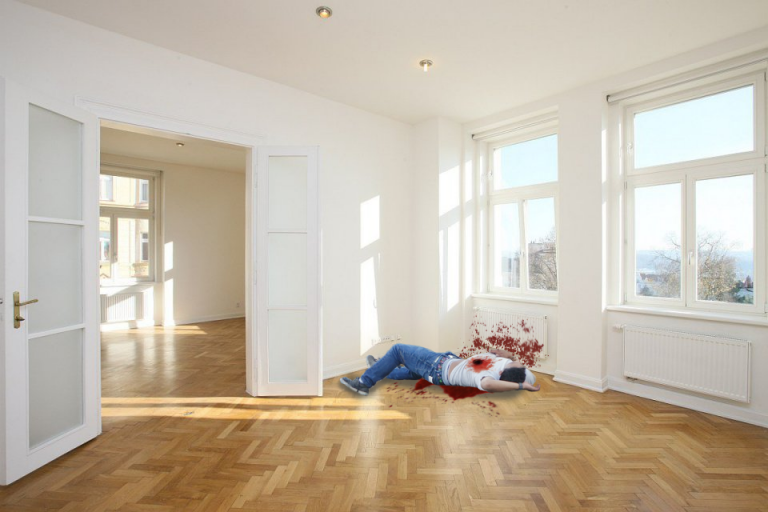 Moving into a new apartment always presents challenges. The movers are late, you’re not done packing, it’s so expensive, things break, and so on. But one of the most common moving problems for New York City residents that no one talks about is what to do when there’s a dead body in your new home.

At Murder House, we guarantee every apartment we show you was the scene of a gruesome murder. What we can’t guarantee is that the massacre will be completely cleaned up by the time your lease starts. New York State property law leaves that at the discretion of the landlord. The best we can do is help you through the whole process of getting that murder victim out of there.

So, here are five simple tips and tricks for how to remove the dead body from your new apartment:

Should I Tell My Super?

If your building has a live-in super, you could ask them to dump that body for you. But there are some things to be wary of.

Your super is there to fix and repair problems with the building and, to a lesser extent, your apartment. Body disposal isn’t a repair issue, it is an extra service that the landlord is not responsible for, which means you will be paying for it out-of-pocket. Plus, it could take the super a few days, weeks, or even months to get back to your request, by which time the body will have already decomposed, and rats will be living in the abdomen. So, when it comes to ditching the corpse, the quickest and cheapest option is to just do it yourself.

Finding a murder victim still in your apartment is enough of a hassle as is, but what if they’re in a pool of their own blood? The blood gets all over the floors, the walls, the windows, it’s a nightmare. Fortunately there are some well known remedies for this.

The first thing you need to check is if the blood is fresh. In most cases when a tenant dies, a landlord will put the apartment back on the market, it will get signed in under two hours, in which case the blood will have not dried completely when the new residents move in later that day. This is the best case scenario for cleanup, when stains won’t be as deep. You can take a household sponge and soap, and scrub it off as you would normally.

If the blood has set for a couple of days, things get a bit tricky. In this case you’ll want to scrape as much blood off the surface as you can, possibly using a chisel. Mix dishwasher detergent, water, and ammonia in a bowl and try scrubbing with a sponge. If you still are having trouble, you may just have to repaint.

Contacting Next Of Kin

Search around the apartment a little and see if you can find any info on who this cadaver was. Do they have any family? Check their wallet for any identification (if there’s any cash in there, you are legally allowed to use it for next month’s rent). See if their phone is on their person, and call one of the ICE numbers. If someone picks up, calmly explain through their hysteria and tears that you just moved in, and their loved one’s inert carcass is in the living room right where you’re planning on putting the couch. If they can come collect it, then great! However, New Yorkers tend to be very busy, so it’s more likely that you’ll have to deal with moving it yourself. These next two tips will probably come in handy!

How To Properly Dispose Of A Body

This one should be common knowledge. But in case you haven’t been keeping up, here’s a rundown. You will need: tarp, garbage bags (black), gardening gloves, rocks, a hacksaw and a suitcase.

After you put on your gloves, move the body onto the tarp. Use the hacksaw to chop up all the limbs and the head, then chop those limbs in half, then cut the torso into quarters. Put each piece in its own garbage bag, and fill it with rocks so it sinks to the bottom of whatever body of water you chuck these into. Then, pile it all into a suitcase that you can take on the subway or in an Uber to your local body disposal site. Easy!

Those are the two obvious choices for New York rivers, where people have been dumping human remains for centuries. Which one is better?

The Hudson gets dredged every year or so, whereas the East River not as much, every six years if that. The Hudson is also a more popular area, with Hudson River Park and Hell’s Kitchen close by. Though, popularity shouldn’t be as big an issue since you’ll be doing your dirty work at night, but you should still consider it should the body not be weighed down properly and float to the surface. So it seems like the East River is the way to go on this one.

But funny enough, they aren’t your only options! New York has plenty of waterways and inlets for you to consider. Some outside options would be the Gowanus, the New York Harbor, Jamaica Bay, and so on. If you’re really felling adventurous, you could even dump the liveless husk in the Atlantic Ocean if you go all the way out to Coney Island. Be sure to pick up a Nathan’s Famous hotdog on your way back for a job well done.